I want to upgrade one of my space to upgrade with a GPU. I switch to the „Settings tab“ and select a T4 small, it triggers a new building process but it remains in this state. I have try it with a few duplicated Space however all hab the same problem. 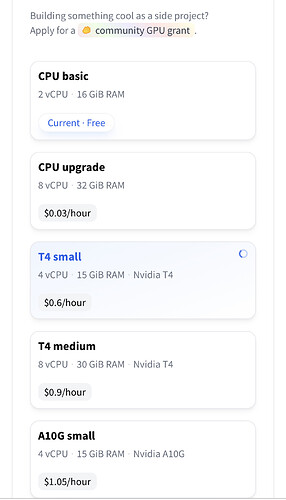 Same for me trying to launch a Docker based space. GPU-backed spaces seem to hang at application startup (“Scheduling Space”). Maybe there is not enough GPU at the moment?

GPUs infra was indeed a bit strained at the time. GPUs should be available now

Hey there, I have been suffering from the same “Scheduling Space” hanging problem for the entire day. Is this an issue with HuggingFace service, or is there something I should be doing to solve this problem? It eventually times out and restarts the build.

For anyone else out there that is encountering a similar issue, someone from Hugging Face reached out to me to let me know that I can try buffing up the compute I was using to solve the issue. This was resolved when I went from A10G small to T4 medium, which increased my RAM from 15GB to 30GB.